Covid didn’t exist during the filming of My Stretch, but it did during the filming of His Stretch and Pro Bono, and we had to follow Covid protocols, which meant masking all the time EXCEPT when actors were on camera. Then they could do anything without a mask: hug, kiss, fight, whatever. But, as soon as the director yelled “Cut” they had to quickly put their mask back on.

And that included me because I was an actor in The Pro Bono Watchman. This is me acting. I played the grandfather of this 6 year old girl. 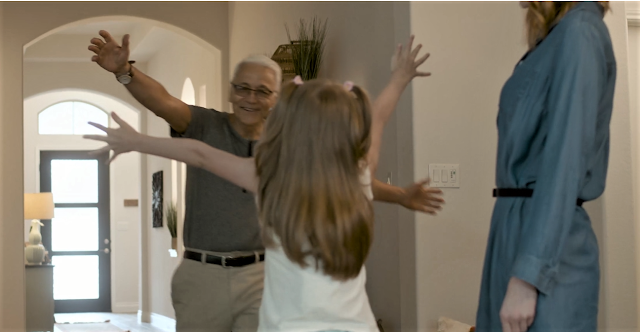 But, what sense is there in doing all that masking if you’re going to be exposed to others in front of the camera? It goes beyond contradiction. It’s more like hypocrisy.

And it’s not just on movie sets. It’s in everyday life. A husband and wife get up and go to work at different places; they shop at different places; and they engage with different people all day long. And I realize that there are people who rigorously and relentlessly practice the protocols. But, they are the exceptions, don’t you think? So, when that wife is eating lunch with her co-workers, obviously, she doesn’t wear a mask while she’s eating. But, even when she’s finished eating and is just talking to them, she probably doesn’t put it on either. The point is that when that husband and wife come home at the end of the day, what reason is there to think they are safe from each other? And if you pointed that out to them, they’d probably admit it and say that they are not going to wear a mask around their spouse and kids because it’s too much too ask. They’re just not going to live that way. I wonder if even Dr. Fauci lives that way.

I run a health retreat, and there is no mask mandate in Texas. But even lately, when guests arrive for the first time, they are often all masked up at the front door. They see that I am not wearing a mask, and I immediately tell them that I don’t wear a mask because I don’t believe in it. I add that they are welcome to wear a mask if they want to, but they don’t have to. And the truth is that so far, everyone has had the same reaction, something like “Oh, thank God!" as they rip their mask off. And then they don’t give it another thought for the duration of their visit, and neither do I.

And when there was a mask mandate in Texas, for instance to enter supermarkets and other stores and whatnot, I wore it. Today, it’s optional, and I choose not to wear it.

But, I’m sure it’s true that over the course of this pandemic, my actions would be considered reckless and irresponsible. But, I haven’t lost a wink of sleep over it, and I haven’t gotten sick either. And I have been tested for Covid twice- not because I wanted to but because it was required to be on set of His Stretch of Texas Ground and then The Pro Bono Watchman. And I’ll tell you honestly that I’d like to make another film. It’s already written, and I mean to the point of nearly the final draft.  It’s called: Joe Haladin: The Case of the Missing Sister. But, I’ll tell you, if we make it, it’s only going to happen if there are no Covid requirements, and I mean none. I’ve had it with that.  I'm not doing it any more because I can't take it any more. I am not putting up with it a third time on set.